2017 is the year when people will be able to see lots of brand new interpretations of best books. Today’s topic is not an exception as director Michael Carney made a decision to release newest American drama movie that is based on the novel of the same title. When it comes to the frequent question, when is Same Kind of Different as Me movie release date 2017, we already managed to get confirmed information about that.

The movie should have come out at the end of April in 2016 but it was canceled. The date was changed to February the 3rd in 2017. But at the end of December 2016, the distribution company made a decision to change the release date again.

In fact, this American drama is scheduled to be released on October the 20th in 2017. Moreover, the distribution company has already successfully represented the trailer to the film which clearly describes the whole touchable story. The official photographing of the project began in October 2014 and lasted a few months ending at the end of December of the same year. 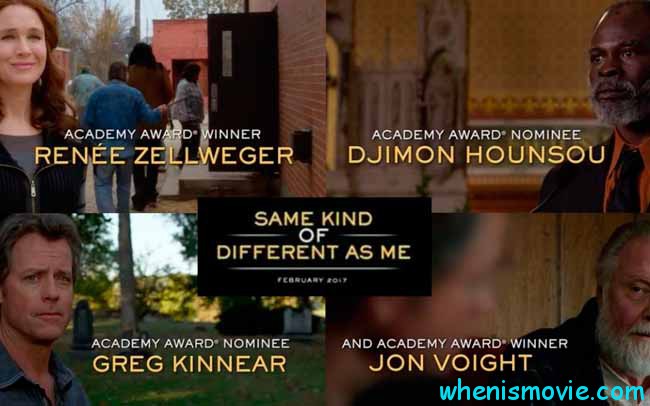 The movie includes the participation and professional play of such actors, as well as stresses as:

After getting the official information about the Same Kind of Different as Me DVD release date we also managed to find out some interesting details about this movie. In fact, it was supposed to be the first Zellweger’s movie in six years after her hiatus. And it would have been if the first official release of the film hadn’t been canceled. In 2016 she became famous again after Bridget Jones’s Baby film was shown in world’s theaters.

According to the book, the movie represents the real biography of one of the authors of the novel – Denver Moore. On the Same Kind of Different as Me official release date in 2017, we will see the story of Moore who used to be a sharecropper whilst he was growing up on a plantation. He was homeless and poor for many years but despite that fact, he managed to change many people’s lives that met him.

One day, he gets introduced to Hall – the volunteer of the meal program for all homeless people – and both became best friends even if each of two of them belongs to different upbringing and has the financial status that cannot be compared. They manage to build strong friendship even if most of the people deny accepting that fact that homeless ones are also human beings.