This decorated sergeant wasn’t a big, masculine man with a gun in his hands. No, he was just a mongrel, a little dog that proved you don’t have to be a human being to be a hero. The dog has been in more action and saved more Allied lives than many soldiers during World War 1. Next year, his story will be shared with the whole world.

Let’s see when is Sgt Stubby movie release date 2018. It will arrive in the United States on April 13, 2018. Same goes for Canada. The rest of the European/Asian cities will get it a week or two later/earlier (depending on the company’s policy). So, was this mutt really that great, or maybe the historians are exaggerating his heroic actions?

Well, he served for 1, 5 years and fought in 17 battles. That means he could’ve been killed numerous times, but the sergeant survived. Furthermore, he saved many lives by pulling them away from the front and taking them to the medics. For his great help during the world to end all wars, he was promoted to sergeant. By the way, this was the one and only time when a dog (or an animal) received such recognition. 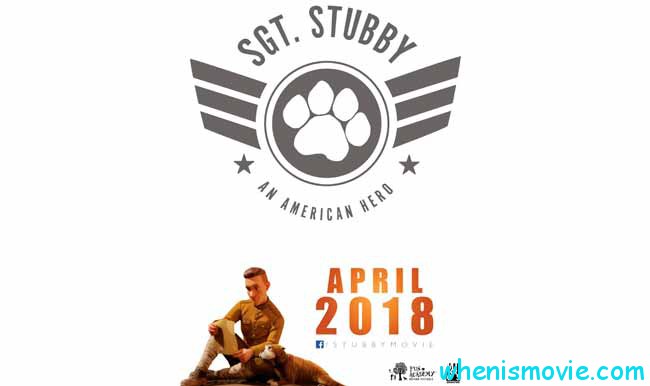 The movie will be focused on his friendship with Robert, just a young soldier who is trying to stay alive on the front and get back home to his family. When these two first meet, Stubby is a tiny brute. However, after the heat of the battle, they turn into one of the best teams in the Allied ranks. Without any proper training, the man and the dog understand each other half-way and take the battle to the enemy.

One Of The Greatest Animated Movies Of 2018

The Sgt Stubby DVD release date is autumn 2018. Given the fact that it’s shaping up to be a very heart-warming and heart-wrenching comedy/drama, we think it would be a great addition to your collection of fine animated films. Stubby is not a war dog or anything like that. He doesn’t even know how to fight. But his passionate heart and the desire to help others allow him to perform miracles during the battle.

Robert takes him in and cares for the dog like his own, and the friendship they forge under enemy fire is what helps them overcome the obstacles and struggles that stand in their way. If you love thought-provoking and uplifting stories that will touch your heart and soul even if you’re grown-up, follow the Sgt Stubby official release date in 2018 and check it out when it arrives at your local theater. The plot, the characters, the awesome graphics and, of course, the strong message turn Stubby into a movie that will be worth every last penny we pay for it.