As far as epic and thought-provoking biographical movies go, Marshall is shaping up to be one of the greatest dramas of the year. It’s set for an October 13th release, and, judging by the plot, it’s gonna be a heart-warmer and a heart-wrencher. Sadly, we don’t have a Marshall movie trailer 2017, but, given the fact that we still have a couple of months before it hits the theaters, it’s safe to presume that the trailer is in the works and will arrive sooner than later.

Now, this is the story of the first black Supreme Court Justice in the Land Of The Free and quite an educational and resonating page in the country’s history. Back when Thurgood was just a young man trying to make it in the big, scary world, America was about to declare war on the Nazis, and the nation was on the edge 24/7. One day, they told him to leave home and travel all the way to Connecticut and become the defender of an African-American driver. It was a sexual assault case, and Marshall had to fight the man’s rich and powerful employer in an attempted murder trial. 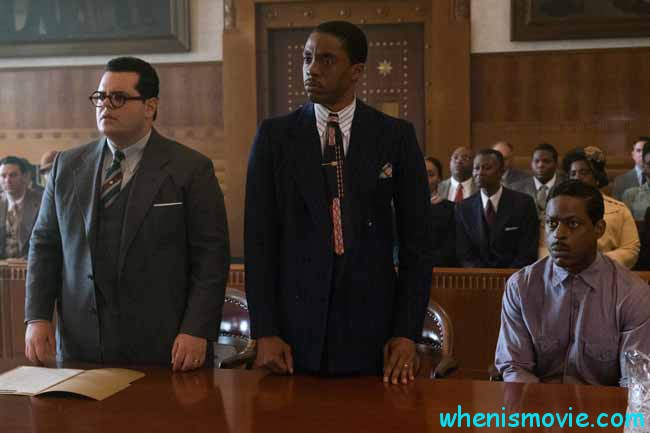 When the tabloids learned of this highly scandalous case, they turned it into a nation-wide story and, after a while, pretty much every American knew about it. Back then, segregation was still a big part of the United States, and the inexperienced Marshall really needed a triumph to prove that he had what it took to be a professional lawyer. And, of course, he wanted to help the African-American fella to put his life back together.

Now, even though there isn’t even a Marshall teaser trailer to get us going, it’s already obvious that Hudlin created a true masterpiece that reflects on centuries-old problems that still haunt this great country. In fact, there’s only one picture available, and it shows Mr. Boseman, the talented actor who’s portraying Thurgood, and we know that the lovely Kate Hudson, the gorgeous Sophia Bush, and Mr. Dan Stevens are all a part of the cast.

A Black Man And A Jew Against The State

So, in order to win the case and show the US that prejudice can’t be our judge and executioner, Marshall teams up with Friedman, also a young and striving lawyer, a Jew, who has never even been in a courtroom as an official representative. Together, these fearless men struggle against the vices of pre-WW2 America and bring the bad guys to justice. With the new Marshall official trailer 2017 right around the corner, we bet this movie is going to be equally grandiose and touching.