“Bitter Harvest” is a new Canadian movie by George Mendeluk is about Holodomor in Ukraine in the 1930s. So here, in this topic, you will find all the answer about the movie, including the answer to the main question: “When does Bitter Harvest come out?”

The director of the movie is G. Mendeluk. He is famous for the next films “Lonesome Dove: The Series”, “The Kidnapping of the President”, “Meatballs 3”, “Almost Grown”.

The composer of the film was announced B. Wallfisch. 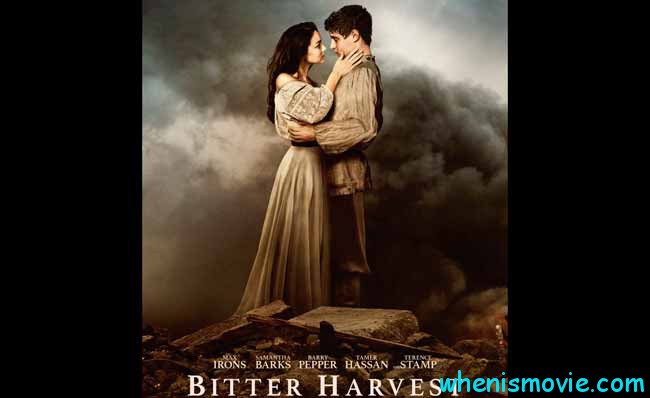 The movie is R-rated. So we can consider that the movie will contain a lot of blood, violence and disturbing images. The movie budget is $20 million.

When is Bitter Harvest 2017 coming to theaters?

According to the official information, in the USA, the film will come to theaters in the end of February 2017.

Holodomor – the mass starvation that has engulfed vast areas and led to death in the territory of the Ukrainian SSR in the first half of 1933 against the backdrop of the famine in the USSR in 1932-1933. Political opponents of the Bolsheviks called the organization of the famine in Ukraine in the period the most terrible crime.

Economically unsound forced collectivization in the Soviet Union in the years 1929-1930 led to a sharp decline in agricultural production, including the bread. However, the grain procurement plan has been increased. In 1930, from the Ukraine was taken 7.7 million tons of grain in order to cover the export obligations of the country. In 1931, the republic was again must pass the planned 7.7 million tons while the grain harvest fell to 5 million tons.

The question arose about the fate of wealthy farmers during collectivization. The basis of their well-being was the work of all members of the family, thrift. This part of the peasants was the most tightly tied to the land and did not want to part with anybody. It is in relation to this category of peasants began a policy of “non-peasants”: was strengthened taxation, limited land rent, it is prohibited from using hired labor, buying agricultural machinery, equipment. As a result, the number of wealthy peasants is declined. At the beginning of the 1930s the government started the terror against the peasants. Elimination of prosperous farms was accompanied by the confiscation of property and banishment to the North and Siberia of the peasants who do not wish to enter into collective farms. People were deported to Siberia, and are called “special settlers”. They were used in the most difficult jobs. By creating collective farms and setting on a comprehensive control, the state received funds for industrialization.

In the early 1930s from the Ukrainian village was seized by state procurement all the bread. Where the bread was not found, grain debtor confiscated, in order of “natural fine”, all food. And since even before collectivization was a massive slaughter, in the end the meat plan was fulfilled only by 10-12%. The meat was exported in large industrial centers but in rural areas, it was not.

Deprived of food, peasant family could not live up to the new harvest. In early 1932 the famine spread throughout the Ukraine and the Kuban. Leaders of the Communist Party of Ukraine have repeatedly appealed to Stalin with a request to reduce the deflated plan for bread. However, there were not made any concessions.

The massive scale the death through starvation adopted at the beginning of March 1933. OGPU has only monitored the dead account to April 15, 1933. These summaries of the number of victims amounted to 2.42 million 100 people in four and a half months. Cases of cannibalism are about 2500.

According to local historians, the death toll in Ukraine is defined in 7.2 million people. According to the US congressional committee, the figure is 10 million. In 2003, the French demographers have come to the conclusion that in 1932-1933 Ukraine lost 4.6 million people.

The movie Bitter Harvest trailer is already available. You can watch it on the YouTube.

The story is about love, hope, and survival against the backdrop of political turmoil in Ukraine in the 1930s.

Yuri, the hereditary Cossack, wins the love of a beautiful Natalka. But his life like lives of many of other villagers, changed abruptly after the invasion of the Red Army.