We would like to acquaint our subscribers with new documentary picture of cinema creator Raoul Peck about life of color population in USA and inform, when is I Am Not Your Negro come out.

In 2016, International Movie Festival in Canada (Toronto) was preview of the picture of cinema director from Haiti island – « I Am Not Your Negro», which conquered people’s choice award. The movie was filmed according to unfinished book of James Baldwin about leaders of black society and life of black population in US. Main theme of the book and the movie is history, social and legal status of black population in America. 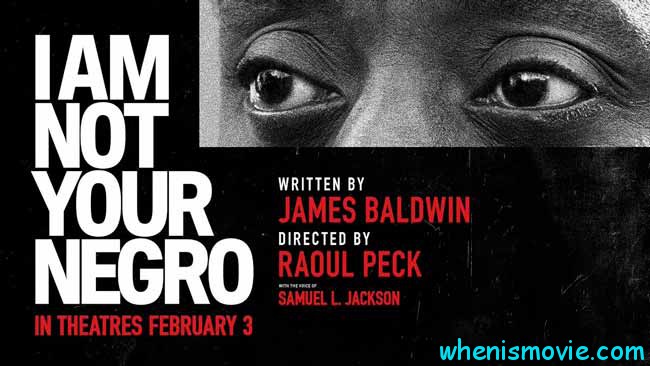 The movie was created according to unfinished novel and draft notes of American writer, poet, social and political activist – Baldwin James. He was born in New York in 1924, died in 1987 in France. This movie contains footage with his participation.

Baldwin’s relatives knew about outstanding work of Raoul Peck under the movie about Patrice Lumumba – famous leader of Congo. They entrusted Raoul Peck all the archives and the notes of James to help Raoul in creation of his movie.

The work on the film took almost 1 decade. No studio in the United States agreed to film this movie. « I Am Not Your Negro» was created under support of TV company «ARTE», France. Work outside the United States allowed to create a picture free from American censorship and any kind of pressure. Thanks to this, Raoul Peck did not have to smoothen or soften the message of his movie.

James Baldwin’s books made a great influence on young Raoul Peck, who discovered the story of Black Panthers for the public. Black activists like Malcolm X, Huey Newton, Evers Medgar, James Meredith and other leaders of black population in America are the heroes of his books. Subsequently cinema director Raoul Peck displayed their story in his movie.

Storyline of the movie

«I Am Not Your Negro» is a story of black people and their input in creation and history of the United States. It is radical movie about opposition, murders, persecution of black leaders and activists.

This documental drama contains the real stories of black people, giving the facts, recordings, describing the circumstances which for a long time were hidden from the public. The movie reveals the issues of race relations, violence and lawlessness of police and tells the history of the fight for the rights in the United States.

In opinion of Raoul Peck and James Baldwin, the history of black population in United States is a huge piece of American history.

This movie is significantly different from media material that Americans get used to watch on TV. It is not a commercial, but historical project, which shows different view on American history.

The movie declares a desire and intention of black people to live in better world and society in which human rights and freedoms have basic and paramount value, same as equality.

Cast of «I Am Not Your Negro»

The movie contains documentary video with Martin Luther King, James Baldwin, Malkolm X – outstanding black leaders. The main actor star of the film is Samuel Jackson. He was chosen as an authoritative representative of black population, who is able to voice the ideas and thoughts of James Baldwin and bring to people.

Samuel Jackson leads this story by the author.

Movie I Am Not Your Negro trailer

Official trailer of the movie is already on youtube.

Trailer presented the main thoughts and ideas of the movie, as well as footage with James Baldwin himself.

The movie has a rating PG-13, because of violent and nudity scenes and filthy language.

I Am Not Your Negro 2017 movie release date

Those, who are interested, when is I Am Not Your Negro coming to theaters, we are happy to gladden. Despite a slight delay (it was planned to release the movie in 2016 already), after 10 years of work on his picture, Raoul Peck finally submit his new creation to the general public. This winter the movie will be shown in theaters.

The picture release in United States is planned on 3rd of February 2017.

According to available information, Raul have already started the work on his new historical documentary film dedicated to the youth of German philosopher Karl Marx.