Do you know who Stubby is? Only the most famous and decorated dog of WW1! This is the only four-legged buddy that was promoted to sergeant due to his outstanding performance on the battlefield. And now, Hollywood is finally ready to recognize this heroic dog’s actions by making what is shaping up to be quite an entertaining animated movie. So, when does Sgt Stubby come out?  In the United States, it’s set to be released on April 13, 2018. Unfortunately, there isn’t any info about other countries, but, judging by the way the industry works, we’d say the international release won’t be that far from the American premiere.

A Heart-Wrenching Bond Between A Dog And A Man

The trenches of the First World War were terrifying, and men were going crazy, but this brave animal saved countless soldiers, warned the allies of upcoming attacks and forged a never-seen-before bond with the US military. The story follows a young infantryman, Rob, whose life changes forever after a funny little doggy arrives at the camp where the fella and the rest of the men are training to beat the Nazis. They are working on their fighting and shooting skills 24/7, hoping to get ready by the time war comes knocking on their door. 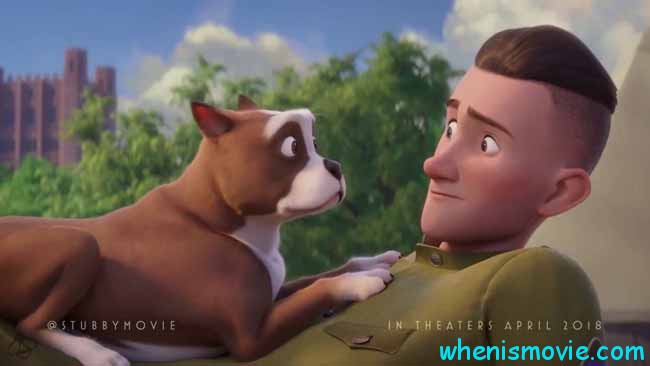 Rob takes the dog in, feeds it, and gives it a chance to make history. The two become best friends in a matter of days. The adventure proves to be extremely terrifying, but together, the American soldiers and this valiant dog make it through the horrors of war. Pinned down somewhere in France, without any proper training or backup, they fight like there’s no tomorrow and watch each other’s backs. The enemy is strong and ruthless, but Stubby was born to shine on the battlefield. You don’t turn into the most decorated animal of war for nothing, right?

A Beautiful Movie With An Incredible Cast

The movie Sgt Stubby trailer that came out recently shows us that before becoming a vital part of the Allied forces, Stubby was on his own, but, when he accidentally stumbled upon Robert, their fates were sealed. The trailer is very bright, colorful and heart-warming, and gives us something to look forward to. Now, given the fact that this is an animated movie, you can rest assured that your kids will have a great time at the theater.

A nice, moving, uplifting film for the whole family is quite a rare thing these days, which means we gotta seize the opportunity and have a great time with our little ones! Ok, let’s see what’s up with the cast – are there any famous folks involved with this project? Yes, there are, and the list includes the beautiful Helena Bonham Carter, the ever-young and ever-eccentric Gérard Depardieu, one of the finest French actors in history, and Logan Lerman, among others.

An Epic Animated Film To Cheer For

Rest assured that their incredible voices will create just the right atmosphere for this touching and educational film. As far as animated historical adventures about war go, Stubby is a must-see. True, the Sgt Stubby movie release date in 2018 is almost 10 months away, which is like a lifetime, but, at the same time, if the team behind it delivers on all of its promises, we’ll have a pretty awesome chart-topper on our hands.

Who would’ve ever thought that a stray dog could turn into a war wet and a true hero, an inspiration for the “brothers in arms” and a tabloid favorite? Again, this isn’t a work of fiction – the movie is heavily based on true events – and it just proves that everything’s possible in this world. With that said, the movie is shaping up to be quite a big deal in the industry. We already know when is Sgt Stubby coming to theaters in 2018 – on April 13th – so, let’s cross our fingers for it!