This year is the year of high-profile titles, expected by many people around the world. One of them is the Ballerina – 3D computer-animated English-language film, created with the participation of Canadian and French studios. If you want to know when does Ballerina come out and what exactly the upcoming premiere is, you can read this article.

The real masters of his craft, which relate to their work with great responsibility, created Ballerina.

The first thing you should know – the film has two directors, two Erics. The first director, Eric Summer, most known for his TV series such as Profilage, Dolmen and The New Adventures of Robin Hood. The other Eric, whose surname is Warin, before the Ballerina directed only one short film – Alex and the Ghosts, so very soon we will see his first significant project. Carol Noble, Eric Summer, and Laurent Zeitoun wrote the screenplay. 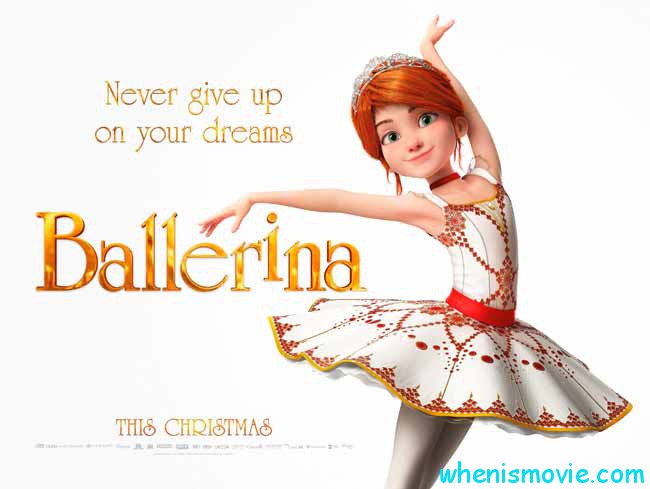 What is certainly worth mentioning is the star-studded cast of the film. The main characters of Ballerina voiced by:

In France, where Ballerina 2017 movie release date is already in the past (the premiere took place on 14 December 2016), the film was released with the voices of Camille Cottin (Felicie) and Malik Bentalha (Victor).

Events are unfolding in Paris in 1879. A girl Felice and her friend Victor live in an orphanage. Felice loves to dance since childhood and dreams of becoming a ballerina. Victor wants to be an inventor. To follow their dreams, Victor offers Felice to escape from the orphanage. Shortly thereafter Felice enters the ballet school, but it turns out to become a ballerina is not as easy as she thought. Every day there takes place the candidates selection, and someone becomes excluded. Felice should work hard to realize her dreams.

The movie Ballerina trailer also shows some moments of Felice’s relationships with other disciples and members of the ballet school. Among them it is the main rival of the girl – Camille Le Haut, who struggles to humiliate Felice. In addition, one of the main characters is a former prima Odette who although has a limp can help the girl with her experience and skill.

Eric Summer and Eric Warin put a lot of effort in their first feature film. Creators even claim that their movie contains motifs of such films as “Billy Elliot” (2000) and “Ratatouille” (2007).

As a demonstration of directors’ serious intentions is the invitation of the French ballet stars Aurelie Dupont and Jeremy Belingard to develop choreography for the film. Interestingly, that originally planned to create a movie using motion capture technology to convey a realistic movement of classical ballet. However, this idea was abandoned in favor of the sublimity and sense of magic. People can’t dance as it is shown in the film.

Another point is the beautiful design of the movie. Working on the visual component of the movie, the artist Florent Mazurel was inspired by photographs of Paris in 1890, as he studied the architecture of the city. Much of his work was influenced by theater “Grand Opera”, which is symbolized in the movie a dream of the main character.

The first time the movie was shown is October 19, 2016 as part of film Festival in France. In December 2016, “Ballerina” was released in cinemas in the UK and, as mentioned above, in France. Another question – when is Ballerina coming to theaters in other countries, and particularly in the US?

At the end of December countries such as the Netherlands, Greece and Croatia have seen the movie too. In January, Ballerina has already been shown in Bulgaria, Australia, and Germany, as well as will be shown in Poland, Georgia, and Russia in the same month. China, South Korea, and Spain will see the movie in February and 3 March Ballerina will appear in US cinemas.