It’s safe to say that these days, we’ve got more and more folks getting into fitness and all kinds of other sports, and that’s great news. It all started back in the 80s/90s when the greatest bodybuilders of all time introduced their art to the world and conquered it with their charisma and “swagg”.

Today we’ll talk about TOP 10 best Bodybuilding movies for all time. If you’re a fan of working out and looking fit and healthy, makes sure to keep up with us. After all, taking a day off to let your muscles rest is of the utmost importance. So, sit back, make yourself a nice protein shake or something and let’s check out our fine collection!

Even if you’re not a fan of big, muscular men, you most certainly do know who Schwarzenegger is. He’s one of the best “builders” in the world and also one hell of an actor. He starred in this engaging movie with Mr. Jeff Bridges himself.

And that should already be good enough for you to grab a copy at the local store and check it out. The plot is not particularly exciting or anything like that, but, given the fact that it’s one of Arnie’s first roles and it’s focused on this sport, it’s a no-brainer. Put it on the list of best Bodybuilding movies if you love the Austrian giant and his no-compromises motto.

Mr. Ferringo, a legend in certain circles, decided to retire from the exhausting routine of bodybuilding in the mid-70s and see if he can be equally great at acting. Eventually, he managed to steal the show with the epic performance of Hulk (yep, the incredible one) in a wildly popular TV show of the same name. So, if you thought that the big monster appeared in the Avengers for the first time, you’re wrong :).

Now, even though Ferringo did a great job with that role, most of his fans wanted him to go back to his true calling. And about two decades later, he made one of the finest comebacks in history. Stand Tall follows the legend’s steps from performing for the big screen all the way up to conquering that bodybuilding pedestal for the second time. Of the TOP 10 best Bodybuilding movies, this is most definitely a worthy pick.

The story is focused on a sly yet capable promoter with only one goal in mind: to take advantage of the bodybuilding mania in America and take a gifted young fella under his wing. The man wants to turn him into a champion and split the profit in half.

He definitely does have the skills to manage him. But it’s not going to be easy to find a worthy contestant. Columbu and Zane, big-time legends of all times, made an appearance in this classic comedy slash drama. For the average Joe, those names don’t mean anything. Yet, the pro “builders” and the hip boys/girls certainly do know and admire them.

If you ask a bodybuilder you know about the greatest movie in the genre, he’ll probably point you in this direction. This is, without a doubt, the breakthrough role for the Iron Arnold. First of all, he established himself as a pretty solid actor.

Second, he showed the audience around the world that films about big, gloomy and muscle-friendly men can and should be interesting. Definitely, one of the TOP 10 best Bodybuilding movies to watch – it’s not even a discussion!

The original movie that came out in 1977 certainly did have a great impact on the world. The cast included Arnie and other big-time athletes, but the sequel did something truly magnificent: gave women the credit they deserve.

True, it wasn’t nearly as great and fancy as the first installment, and the critics did slam it from every corner. Yet, if you appreciate movies that change the way you think about certain things, then keep it in mind. After all, women should be treated as equals to men, and PI 2 helped society realize that.

We usually think that people love to pump iron at a young age. That’s actually true, but some heroes just don’t want to be like everybody else. This 2007 documentary is centered on Mr. Friedman, AKA the Grandmaster, who was ready to put everything on the line.

In order to get back on that horse, he had to fix a ruined relationship with his son and work even harder than ever before to try and win back what used to belong to him. This is an inspiring, motivating and uplifting movie that proves age doesn’t matter if you want to do something bad enough.

The critics claim that along with the iconic Pumping Iron, this is the best film about bodybuilding. The director did a great job of showing the regular viewers what it truly means to fight for the title of Mr. Olympia.

Blood, sweat, and tears come together to forge iron inthe rivalry between Greene and Heath, the heroes of our time. They were both ready to run that extra mile just to be #1. Yes, the fans of the sport already know the outcome of this clash, but it’s still one of the TOP 10 best modern Bodybuilding films!

Another documentary movie, dear friends. The best thing about it – the directors had access to real-world pro competitors. Obviously, this 2015 release will be of great use and interest to the ones who want to become Olympia champs one day.

The rest of us, however, might find it a bit boring. At the same time, the atmosphere in the film is unique and captivating, almost relaxing, even. These men have dedicated their lives to achieving perfect physique, and their stories might just be the necessary nudge for you to stop being lazy and start attending the gym.

Mr. CT Fletcher is one of the stars of working out/bodybuilding and a great motivator for the current generation. He had problems with his health, had to leave sports for a while, but eventually did find the strength to come back and keep on going.

On YouTube, this man is probably the most popular character when it comes to building muscles and fighting your inner demons. As for My Magnificent Obsession, it’s like his gift to the world. After IAG (Iron Addicts Gym) opened its doors in Cali, Fletcher decided to release this movie. You don’t even have to know and love sports to appreciate this pumped up film.

So, what is the best Bodybuilding movies? We’ve already discussed nine epic “blockbusters” that you should have in your collection if you take this sport seriously. However, we’ve kept the best one a secret from you. And now it’s time to introduce y’all to The Comeback – the iconic 1980 movie about Arnold and his never-ending journey towards greatness.

This time around, he was trying to win the 7th title of the fittest man in the world. By the way, many folks refuse to call it a sport and call bodybuilding something of a beauty contest. But if you know and love the world of working out and pumping iron, then you know that it’s not true. People who watched this classic cut changed their opinion about pumping. 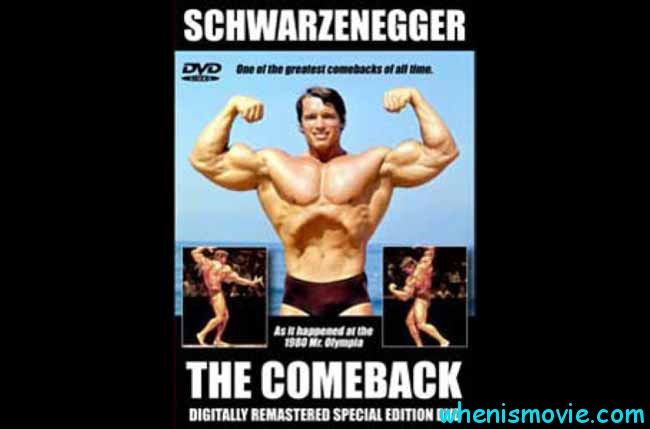 And that concludes our list, ladies, and gentlemen. As you can see, bodybuilding is a way of life, a philosophy of living, if you will. It’s dangerous and demands supernatural strength and dedication. However, at the end of the day, it’s all worth it if you know what you’re doing.

So, make sure to check back with us more often to catch the latest posts and don’t forget to work out. Take care of your health, stay in shape and watch good movies with us! And remember – Schwarzenegger isn’t the only bodybuilder in the world. He’s just the most popular and loved one J