Dragons have always been popular in fantasy books, movies, and TV shows. And with the Game Of Thrones franchise breaking all kinds of records, these mythological creatures are getting even more recognition. Today we’ll discuss TOP 10 best Dragon movies for all time.

These majestic beings are known for being unbelievably strong, wise and ancient. And once you insert a dragon or two into a movie/book, it almost always becomes a big-time hit.  Come on, what could be cooler than a fire-breathing, flying and gold-loving beast that can destroy whole villages without even breaking a sweat? 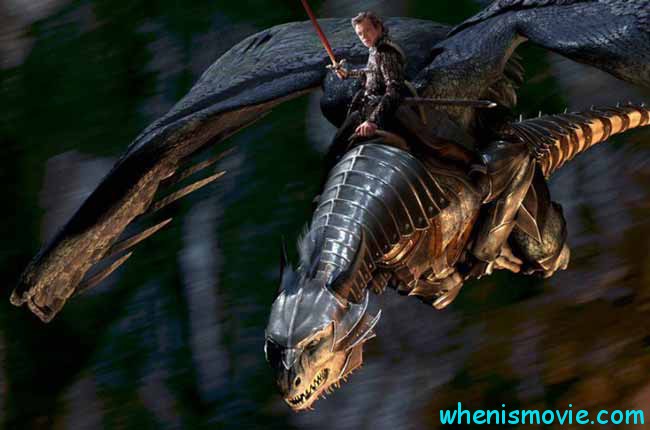 As far as the most impressive and high-grossing movies with flying disasters go, this one’s definitely a top-3 pick. Jackson created a mighty series with the LOTR, and the second chapter is, without a doubt, the most entertaining and thrilling one. Mankind and the elves are pinned down – nowhere to run.

The castle is the only thing between the hordes of the orcs and the innocent men, women, and children. Together with the tall allies, the humans are successfully holding off the invaders. However, when Sauron arrives with his army of dragons, the allied forces fail. By using top-notch computer graphics, the team behind The Two Towers created one of the finest (and scariest) on-screen beasts ever.

Another fine cut from the Tolkien franchise. Of the TOP 10 best Dragon movies for families, this one’s a no-brainer. Smaug is a centuries-old creature guarding a fortress full of gold and all kinds of treasures. Bilbo, along with his friends – the dwarfs – is on a quest to defeat the mighty beast and take back his home.

They most certainly lack the manpower to crush the flying monster. On the other hand, by using their wits and agility, the hobbit and his loyal teammates will find a way to hurt Smaug pretty bad. They need the Arkenstone to regain control over their hometown, and the only way to get it to outsmart and outmaneuver the sinister guardian.

Einon, a young inexperienced warrior, the King, was mortally wounded during a battle. He was slowly dying, and only a being named Draco could heal him and get him back on his feet. Years later, the dragon meets a slayer who offers the beast to join forces against the king that has gone completely crazy.

What used to be a gentle boy has turned into an evil King who’s throttling the whole kingdom. He’s got his savior’s blood rushing through his veins, which makes him incredibly dangerous. It’s up to the last dragon in the world and the best slayer to stop this madman from taking more lives than he already has. An epic fight is coming, and, in order to win, the human and the beast will have to trust each other.

Put this release on the list of best Dragon movies to watch if you love a great story and a star-studded cast. Welcome to a future where planet Earth is ruled by evil monstrosities that can breathe fire and destroy big cities in the blink of an eye. Humanity is crushed, and the last survivors have formed resistance groups to fight the monsters off.

Quinn, the hero of this tale, was a little boy when his mom accidentally brought the behemoths back to life, and now it’s up to him to protect the people that need a leader to take them to victory. One day, an army of American slayers comes around, claiming they know how to defeat the dragons. They need Quinn to join them, but Zan, their boss, doesn’t always see eye to eye with the man. Eventually, they find a way to put their differences aside and work together in an attempt to win the planet back.

Kendrick spent his childhood years without a mom and a dad: an attack by the orcs destroyed his village, and Darius, the baby’s brother and a little boy himself, became his only guardian. When Darius grew into a man and a strong warrior, he dedicated himself to keeping his sibling alive and well.

But when he learns of gigantic flying thingslaying waste all over the kingdom, he remembers the old prophecy and takes his little brother to a far-away castle where the masters train kids to become dragon slayers. The journey towards the castle proves to be perilous and hazardous: the brothers escape humans, orcs, and other obstacles on their quest to defeating the creatures that have infested their home.

If you love science fiction and Japanese comic books, then you definitely know who Godzilla (or, rather Gojira) is. He’s a god-like creature that can erase entire civilizations from existence to punish them for their sins. In this movie, a group of time travelers from the future – the 23rd century, to be exact – goes back to 1992 to warn the Japanese government of a catastrophe that will happen in the nearest future.

They claim that Godzilla will bring the nuclear apocalypse, and the only way to stop it is to go back in time and prevent the atomic bomb tests that lead to its creation. But, as it soon turns out, the people from the future wanted to bring King Ghidorah into the world to destroy Japan and bury it into the ground. Definitely, one of the TOP 10 best Dragon movies to watch!

A lonely orphan boy with no parents – Eragon – comes across a mysterious blue stone in the middle of the forest. Soon, a dragon comes out of it and trusts the kid with its powers. The brute invites him into the world full of magic, and power. The only way to bring back peace and order into their kingdom is to work together and trust each other 100%. Eragon becomes a new rider and rides his new friend like he was born for it. His job is to free his people from the crazy king and his sinister wizard. Darkness has taken over the lands, and there’s no escaping it. But now that the orphan has a sacred bond with the potent beast, the innocent ones finally have a new hero.

Welcome to the 5th century. The story follows a striving Merlin who’s struggling to find his place in a kingdom ruled by magic. The Mage, one of the greatest wizards in history, is training the boy – he feels that he’s got a huge potential. The kid’s abilities will be of great help in the upcoming war against Vendiger, a man he once called a friend.

He’s the enemy now and wants to take over the kingdom with a “fleet” of dragons that burn and destroy everything on their way. Merlin has the power to protect the lands and to defeat all evil. However, he’ll have to learn to control the powers hidden deep inside. Of the TOP 10 best modern Dragon films, this one’s the best action-adventure cut.

Hiccup, the hero of this beautiful tale, is a young Viking who wants to grow into a fearless warrior like his dad and the rest of the warriors in his tribe. They hunt dragons and defend their villages from their wrath. The boy dreams of being as strong as skillful as the elders and sets out on a journey to find a beast and to slay it.

On his adventure, he does come across a little dragon, but, instead of fighting each other, the two turn into best friends. Could this unusual bond be the start of a peace between the two species? Maybe the clumsy boy and the tiny beast will do what their leaders couldn’t – find a way out of the centuries-old war?

This movie is inspired by the insanely popular series of video games and invites the readers to enter the world full of magical creatures and lethal beasts. Damodar, an evil wizard, wants to take over the entire realm and is ready to betray his own kind to do that. He summons an ice dragon that crushes everything on its way. So, it’s up to a team of valiant heroes to stop the lunatic and to ensure peace and prosperity in the kingdoms.

Alright, that’s our answer to the question -what is the best Dragon movies? As always, stay tuned for more awesome lists and reviews!