TOP 10 best Snowboard movies to watchcan be recommended tothe fans of extreme winter holidays. They will not only entertain and improve the mood but also increase vitality, make you feel happy.

Stunning views of the mountains, sparkling snow and a feeling of pure frosty air – only in the movies about snowboarding you can find all this. You immerse yourself in the atmosphere of high-speed descents, exciting professional tricks, and adrenaline. 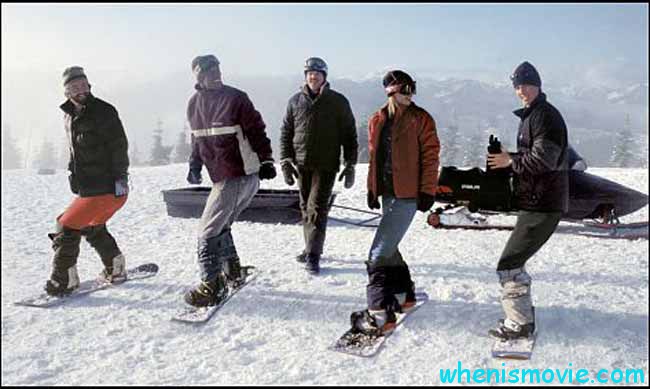 The Japanese customer instructs the American film group to shoot an ad on the background of the Alpine nature. Order executors decide to impress the quiet Japanese imagination and shoot an ad without special effects with real ski trails, and even with the avalanche. But this is only a tie.

In the mountains, American skillful extreme snowboarders face the Serbian ones. Americans, as you know, are used to winning, but the Serbs were cut from the same cloth. The spectator with pleasure can watch the struggle of equals on the screen. This struggle comes with varying success. All this is accompanied by such energetic music that you yourself want to jump on a snowboard.

Jack became famous not only for playing hockey but also for stunts on a skateboard. Completely accidentally hitting in the area of ​​snow-capped mountain peaks, like a normal passenger who has flown on the wrong flight, the chimpanzee begins to learn winter sports. He liked snowboard the most, but robbers, in turn, liked Jack.

The main task of the talented chimpanzee is to help his young friends-snowboarders to win in a sports match. However, on the way of Jack, there are two scammers, far from the ideals of fair sports struggle. They, oddly enough, are only interested in money.

But Jack is a versatile talent. He is not only a hockey player, skateboarder, and snowboarder but also a fighter with organized crime. Using all his monkey potential, Jack emerges victorious from this confrontation, bringing joy to his friends-snowboarders and a true delight to all spectators.

The documentary film is the TOP 10 best modern Snowboarding films.

The film is based on documentary shootings of incredible tricks of snowboarders – Travis and his fellow-friends – in the most remote corners of the earth. But at the sametime, there is a not only extreme but emotional human story in the pic. The main idea of the film is overcoming the obstacles that are given by the extreme untouched nature of the ocean and eternal snow.

The scriptwriters paid special attention to the plot of the film. The main character Gaspard works in a store for the sale of ski and snowboard equipment, but he has other dreams. His idol is the professional champion Attersen. Gaspar directs all his efforts to gain favor with his idol and learn from him the skill of snowboarding. But as a result, he falls in love with the Attersen’sgirl that does not improve their relationship. Nevertheless, Gaspar is firmly on his way to becoming the champion in snowboarding.

The advantage of the film is that the authors emphasized the human relations of snowboarding athletes and tried to approach this topic psychologically. However, the small budget of the film did not allow large-scale shootings. Nevertheless, the film will be of interest to spectators of different ages, especially to connoisseurs of French cinema.

The film is shot in an easy sporting and entertaining manner and can be recommended for viewing by the whole family. The plot of the comedy is uncomplicated and is built on the opposition of a group of young snowboarders to a tycoon cherishing the secret hope of building in Alaska instead of a seedy snowboard base a highly profitable boarding house.

However, not everything is so simple in Alaska, not everything works out with money. Young snowboarders are not only chasing the girls or going down the mountain on a snowboard. If necessary, they are ready to create a cohesive team to protect their sports territory. In this, they are helped again by pretty girls.

The struggle of the youth with the tycoon does not lead the viewer away from the main goal of the film – preaching an easy approach to life based on a continuous positive. Snowboarding here is also irreplaceable. The film is dedicated to it from the beginning to the end. Extreme descents against the backdrop of remarkable landscapes alternate with funny drunkenness in the bar.

It is the middle of the TOP 10 best Snowboarding movies for all time.

Initially, it may seem that this film has nothing to do with snowboarding because its main character is the young surfer Johnny. The boy lives with his parents in Hawaii and every day he does his favorite thing – he plows through the ocean on the board. But one day Johnny learns that his family is moving to snow-covered Wyoming, where the wave can be found only in a cup of coffee. First, the hero seems that the dream of becoming a surfer is in the past. But then suddenly he discovers that a snowboard is very similar to his surfboard, and snowy slopes to high waves. AndJohnny decides to try in a new sport.

Two teenagers, lovers of snowboarding, come to the ski resort to have a good rest. But the older sister of one of them interferes with the relaxation: she tells her parents about all the actions of her brother and his friend. And then the owner of the house, where the snowboarders settled, also gives them a lot of work. Nevertheless, the guys manage to find time to go for a ride. On the snow track, they get acquainted with pretty girls, but they already have boyfriends. In general, now the guys have to solve three tasks: get rid of endless work in the house, out of the care of the elder sister and deal with the boyfriends of the girls they like.

It is one of the best movies of the TOP 10 best Snowboard movies for families.

Another story about Cinderella played out in the scenery of the Austrian Alps. Young Kim from a small English town gets a job in a fashionable ski resort in the Alps. It’s hard for her to get used to a new world of luxury, relaxedness and snow records. But soon Kim finds himself a talent for adescent on a snowboard and, it seems, falls in love with the cute son of the owner of the resort, having a rest here with his girlfriend. Can Kim make her way to the World Cup on asnowboard with a valuable prize for the winner?

The protagonist – a guy named Mikkel – moved from Oslo to a small town in the west of Norway, where his mother got a job. Mikkel is a good skateboarder, but in a new place, everyone skates only on snowboards. And not everyone likes the new urban upstart. Faced with a new reality, the guy decides to join the hostile environment and become the best there.

Here is the leader of our compilation!

A former Olympic champion named Rick, trying to attract attention to his sport, decides to organize a competition for the extreme snowboarders. But a few days before the start all the routes have to close – a snow storm covers the area. However, a group of young and desperate snowboarders decides to test themselves and ride along the deadly mountain alley.

Hope you found the answer to the question – What is the best Snowboard movies?