You must admit that one of the most beloved ways to spend a weekend is to watch a good comedy. The main thing is to choose a movie. We are here to share TOP 12 best english Comedy movies 2019 to watch with you. We make only the best selections.

The story of the private detective Sherlock Holmes (Will Ferrell) and his partner Dr. Watson (John C. Reilly) takes a new turn. The eccentric duo takes on the investigation of a new complicated case and manages to make enemies from all over the world.

Holmes & Watson is the second feature movie of Etan Cohen. His first movie “Get Hard” earned at the box office almost $112 million.

A small part in the adventure comedy will play Bella Ramsey – an actress who has received world fame for filming in the popular TV series “Game of Thrones.” Cohen’s work is Bella’s debut in the full-length film.

Rebel Wilson is on the list of best english Comedy movies to watch.

The main character of the film is a girl named Natalie, who has long been disillusioned with the men and decided to put aside her personal life. Natalie fully focused on her career as an architect, but once, due to an absurd coincidence, the main character finds in the very center of romantic events.

During the shooting of the film, Rebel Wilson suffered a concussion. Despite this, Wilson returned to the shooting process without interrupting the schedule.

Rebel Wilson is not only played a main role in the film, but also acted as one of the producers of the picture.

The shooting took place in New York in the summer 2017.

The protagonist of the cartoon, Lance Sterling, is a super-professional spy. He copes with the most difficult tasks better than all other spies do.

Walter Beckett – the complete opposite of Lance, but at the same time a friend and indecisive “geek” – the genius of inventions. He develops the gadgets that Lance uses in his missions.

However, when the best spy in the world turns into a pigeon, he has to rely on his friend in a completely new way. In order to save the world, the heroes need to become one team.

Dwayne Johnson is on the list of good english Comedy movies.

In the center of the plot is the Bevis family. They arrange live performances in small venues, driving around the country. Zak and Raya dream of becoming famous and getting into the WWE.

The movie is based on the 2012 documentary film “The Wrestlers: Fighting with My Family,” which, in turn, tells about Sarai-Jade Bevis, a British wrestler known as Page, the first female champion in WWE NXT.

In 2017, it was announced the start of work on the feature film and that Stephen Merchant will be the director. Dwayne “The Rock” Johnson will produce the film and play the role of himself in it.

Some parts of the film were shot on March 20, 2017, in the multipurpose sports arena “Staples Center” in Los Angeles right after the airing of the WWE Raw wrestling program. In one of them, a fight between Page and the AJ Lee was reconstructed for the movie.

The shooting took place in Norwich – hometown of the main character.

In the center of the plot of the cartoon is Marla. Her brother – Charlie – falls into the universe of Playmobil toys and she has to find a way to find and save him.

In the new amazing world, Marla will meet interesting characters, including a food truck driver Del, a secret agent Rex Dasher, a robot loser, and a mysterious fairy godmother.

The cartoon is based on Playmobil designer, which is developed and produced in Germany.

Initially, Bob Persichetti was appointed as the director of the animated film but then Lino DiSalvo replaced him.

Playmobil: The Movie will be the first part of a trilogy of full-length movies based on Playmobil.

The budget of the cartoon is 75 million dollars.

Some characters in the cartoon were created using CGI movie graphics.

The release date was originally scheduled for January 18, 2019, but the creators later moved the movie premiere to April 19, 2019.

Tarantino’s movie is on the list of best modern Comedy films.

The action takes place in Los Angeles against the backdrop of a terrible tragedy that happened to actress Sharon Tate. The movie centers on the actor Rick Dalton (Sharon’s neighbor), the forgotten star of a long-running television series, who is now trying to find a new way to enter the cinema business. His understudy Cliff Booth does the same.

The new film is based on the real story that happened on August 8, 1969. The musician Charles Manson, who grew up in a dysfunctional family, always had a tendency to violence. Once Manson ordered his friends to kill all the guests of a country house located in the Benedict Canyon, an isolated place in LA. Friends followed Manson’s order and killed everyone, including actress Sharon Tate, who at the time was nine months pregnant.

After long court proceedings, criminals, including Charles Manson, were sentenced to death. However, the Supreme Court later reduced the sentence to life imprisonment. Since then, Manson has repeatedly applied for early release, but each time he was refused.

Peter Parker goes on summer holidays. However, Peter will not be able to relax because he will have to help Nick Fury. Together they have to uncover the mystery.

Thus, the filmmakers officially confirmed that Peter Parker will work for Nick Fury, not for Tony Stark, as in other films where these heroes appeared. It is unknown why Stark does not appear in the film, but many fans are preparing for the fact that Iron Man will die in the fourth part of Avengers.

It is also known that one of the villains of the film is Mysterio, who teams up with Peter in a common struggle against Elementals. However, later it turns out that Mysterio who is the reason for these mysterious and dangerous creatures in Europe.

In the center of the plot of the movie “Men in Black 4” are young and promising agents of the London secret organization engaged in social protection and cooperation with aliens who have lived on our planet for several thousand years. At this time, the main characters will go on a journey around the world to solve the mystery of one extraordinary murder.

The third part of the film earned more than 600 million dollars at the box office. For this reason, the franchise creators thought about the continuation of the film or the spin-off. In September 2017, it became known that the Sony Pictures Entertainment studio began production of the fourth part in the franchise.

The main heroine – Queen Elsa – controls element of frost. Since childhood, Elsa played with her gift, but as an adult, she could not contain her abilities and covered the whole city with snow.

The head of Pixar, John Lasseter, shared his emotions: “We really enjoyed working on this cartoon and we’ll be happy to return to the world of these characters. Jennifer and Chris came up with a great idea for a sequel and you will hear about it more than once before returning to Arendelle again. ”

Now Elsa is learning to control her gift. She tries to take care of her sister Anna and be a good queen. The director of the cartoon, Chris Buck, explained the changes in the main character: “She has traveled such a difficult path and now feels that she can open up to the world and enjoy life again.”

In the second part of the cartoon, the audience expects many fun and unpredictable adventures. Chris Buck continues to intrigue an audience: “We have two main female characters in Frozen 2 and we want to keep in secret the plot of the next part.”

Pikachu as an investigator is on the list of really good Comedy films 2019.

A private detective Harry Goodman disappears without a trace. His son begins his own investigation. He asks for help father’s old partner – Detective Pikachu – a funny and charming pokemon. Son and Pikachu become companions in this dangerous journey.

The plot of the movie is based on the eponymous game developed by “Creatures Inc.”

The image of the Pokémon Pikachu was created with the help of a motion capture program using 3D graphics.

Jennifer Lopez is on the list of best modern Comedy movies 2019.

Maya (Jennifer Lopez) is a girl without a degree who has worked for many years in the Value Shop supermarket. When lifetime provides the opportunity to become a store manager, Maya applies for it, but the management decides to hire a man with an MBA degree.

Maya shares her feelings with her friend Joan and boyfriend Trey about what happened. A few days later, she was suddenly offered a high position at Franklin & Clarke in Manhattan. Nevertheless, Maya goes for an interview and the director of the company, impressed by the mind of the girl, hires her. However, on the very first working day, Maya learns that she is to participate in an important competition. It gets very complicated when she knows that her main opponent is Zoe, the daughter of the owner of the company.

The Value Shop does not really exist. All shooting took place in the Food Bazaar supermarket, which at that time was open to the public.

After reading the script, Jennifer Lopez proposed to play the role of baseball coach Trey to Milo Ventimiglia. He agreed, but the work was complicated by the fact that Milo was filmed at this time in the TV series “This is us” in Los Angeles, while the shooting of “Second Act” took place in New York.

Security Agent Luke Hobbs is forced to unite with his old enemy, the most dangerous criminal Deckard Shaw, to confront a common enemy.

Jason Statham and Dwayne Johnson perform the main roles in the film. As soon as he appeared in the Fast and the Furious 5, Dwayne Johnson (Luke Hobbs) became a favorite of the public. Not surprisingly, the studio decided to make him the main character of the spin-off.

The launch of the spin-off caused some friction between creators. For the sake of the release of a separate movie, the studio moved the release of Fast and the Furious 9, but subsequently, Vin Diesel, the producer, and the lead actor assured the fans that everything is going according to plan. 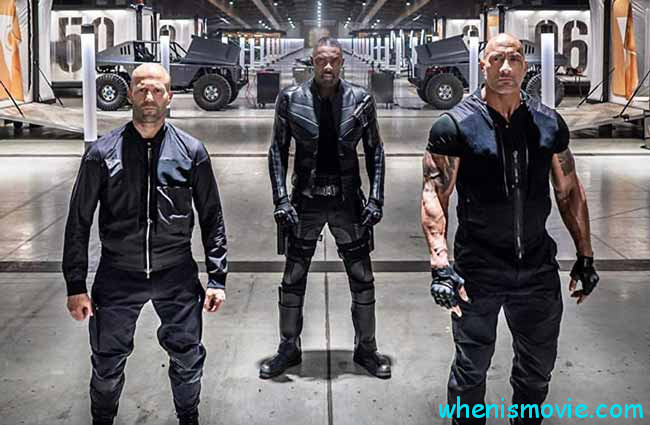 TOP twelve good Comedy movies in theaters 2019 is coming to an end.

It should be noted that TOP 12 new good Comedy movies 2019 release dates are already available on the Net.