This is an upcoming computer-animated banger, a family movie that’s equally romantic, mysterious and hilarious. It’s the direct follow-up to the 2011 film that received generally positive reviews and was successful at the theaters. Alright, so, when is Gnomeo and Juliet 2 Sherlock Gnomes movie release date 2018?

Is it even coming next year, or will we have to wait till 2019? Thankfully, no: it’s set to arrive in the States on March 23, 2018. The folks in the United Kingdom will only get a chance to check it out on May 11th, which is almost two months later. The Brazilians, in turn, will be able to watch it on January 18th. Worldwide starts like lovely Blunt, along with the handsome Depp will give their voices to the main characters.

Gnomes Against The Evil Abductors

The production company has learned a lot after the original movie and is getting ready to deliver a big hit with the official sequel. Expect even more fun, action, and awesome characters! Paramount did a 100%-animated movie back in 2011 (yes, it was called Rango), and now it’s time to get back in that saddle. The story follows the mysterious disappearance of the garden gnomes. Nobody knows who’s taking them and for what purpose. 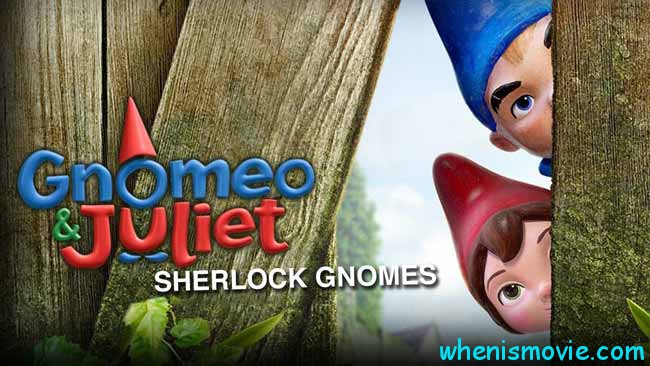 One thing is certain: this can’t go on for any longer – someone needs to stop it. So, Gnomeo hires Sherlock, the best detective in the vicinity, to investigate the case and to make sense of it all. The Gnomeo and Juliet 2 Sherlock Gnomes DVD release date is late summer/early autumn 2018, dear moms and dads. Keep that in mind if you need a solid comedy slash family movie for the moments when your little ones get on your nerves ’cause there’s nothing good on the TV :).

Ready To Deliver An Instant Classic For The Fans

Production of the second chapter started back in 2012 when an executive at Rocket Pictures announced that the sequel was indeed in works. Two people have been writing the script, and it looks like the company bosses are happy with it. Sir Elton John is making brand-new songs (exclusives) for the film, which automatically means you’ll feel just the right atmosphere at the theater when you attend the premiere.

Mr. Stevenson, the man who directed the world-famous Panda series, is to direct this family pleaser. Ok, the Gnomeo and Juliet 2 Sherlock Gnomes official release date in 2018 is less than a year away, and, judging by the information we have, it’s safe to say that next year will be dominated by animated comedy films. Brace yourself for yet another awesome adventure with Gnomeo and his friends!