Music plays a vital role in our lives – always has, always will – and Hollywood is doing a great job of bringing music and movies together with the help of the best screenwriters, directors and, obviously, music producers/songwriters/singers. Music is about movement, and that is why our TOP 10 latest Hollywood Music movies 2017 are perfect if you want to “watch” the rhythm, the melody and the lyrics on the big screen. Let’s check out today’s nominees!

This is a breath-taking love story set in the modern-day world (Austin, to be exact). The movie follows 2 lovely entangled couples, Faye and her friend BV, two talented, yet struggling writers, and Cook, a big-time music producer. Welcome to the Texas music scene with all of its benefits, downsides, and everything else in between. The main characters are simply trying to make it in the industry and want to share their music with the fans, but this perilous road will test them with fast and easy money, big-time contracts and compelling offers. Will they be able to sort through all the lies, secrets and betrayals and find their way back to each other and the way they used to be before this rollercoaster?

Wheeler is a brilliant country music singer and he strongly believes in his own success. He leaves Texas, his native state, and moves to Nashville, America’s center of music, to follow his dream of becoming one of the best musicians in the whole world. The movie does a great job of showing the audience the legendary town with its iconic auditoriums, concert halls and the amazing atmosphere that’s circling in the air 24/7. Recording studios, gifted musicians and awesome singers come together for this musical journey. Of the TOP 10 new holly Music movies, Wheeler is most definitely a must-see if you’re a big fan of country music and everything that it stands for these days.

We all loved the first Pitch Perfect movie: it was fresh, exciting and highly entertaining. The second one was a bit of a drag, and that is exactly why the expectations for the third installment are kinda “blurry”. Unfortunately, no details have been revealed yet, except that Wilson and Kendrick will be the main characters and will lead their team to new victories. The Bellas aren’t going anywhere either, so, expect to see the “original gangsters” in Pitch Perfect 3. The girls are still growing up and learning how to sing, how to dance and how to stand strong on both feet with all the craziness that’s going on in their lives.

This is a stand-out cut, ladies, and gentlemen, as it’s not just a musical-dance movie, but also quite a mighty thriller. Wyatt, an ambitious dancer, has been having all kinds of problems with the law, and now the DEA is forcing him to work for them as an undercover agent. He is to “infiltrate” a nightclub that is known for its notorious reputation. But when the guy meets and falls in love with the owner’s daughter, everything changes. The life of a double-agent is not what Wyatt has signed up for, but he can’t just leave it all and run away with the girl because there will be consequences. Put this film on the list of Hollywood Music movies 2017 if dancing is what you know and love.

For some reason, Miguel’s family forbids him to create music and/or listen to it. However, the boy’s passion is just too strong, and, despite their constant warnings, he sets out on a journey to make his dreams come true. He’s got an idol – De La Cruz – and he wants to be just as great as he is. Miguel’s path is both exhausting and confusing, but his love for music gives him the necessary strength to keep on going despite all odds. Eventually, he learns the real truth behind his family’s “hostile” attitude towards music and finds a couple of friends along the way that accompany him in this hazardous yet rewarding journey.

If you love romantic dramas that are both heart-warming and heart-wrenching, make sure to check this one out. Carley, the main character of the movie, is an aspiring singer and figure skater. She’s just 18 years old, but she’s struggling with a very rare disease (malignant melanoma). However, the girl is never losing hope and keeps fighting her condition to the very end. Of the TOP 10 best Hollywood Music movies of 2017 to watch, Kiss and Cry is the most powerful, moving and poignant one. Grab your hankies on your way to the theater!

Mr. Miles Davis was one of the greatest musicians of the previous century, and his legacy is simply enormous. Don Cheadle did a wonderful job of delivering an exceptional performance. If you love movies about life-defining and industry-changing people from the world of music, this fascinating film is a must-see for you. Davis was right at the forefront of the jazz movement, but in the late 70s, the man was going through a rough patch: he was having all kinds of problems with his health, the drugs were numbing his musical voice, and the horrors of the past were haunting him like never before. Yet, he got back on his feet.

Mia is sick and tired of being a waitress – she wants to make it in the world of acting. The girl is rushing through LA, hoping to get a role that will change everything. She’s going to numerous auditions, but nothing works for her. The big break isn’t coming, and it’s starting to drive her crazy. Sebastian is a jazz pianist and also wants to break free from the life of an average man. Soon, the two meet and fall madly in love with each other. Yet, when the long-awaited success finally comes, it puts their relationship in danger. The list of TOP 10 latest released Hollywood Music films 2017 wouldn’t be complete without this blockbuster.

A 14-year-old bloke, Conner, is trying to find his place in a new school dominated by super-cool and “hip” kids. It’s 1985, and he’s doing everything in his power to impress a beautiful girl and to make some friends. He decides to start his own band, and when his older bruv gives him the thumbs up, that makes Conner believe in himself. But will his band give him a chance to win the heart of the young lady and to earn the respect of the local lads and lassies? Sing Street is an awesome romantic drama with a great cast of characters and lovely music.

Buster is a koala, and he dreams of restoring his movie theater and bringing the old days back. Along with Eddie, his good buddy, he hopes that a singing competition will be enough to raise that much-needed money. To his surprise, pretty much the whole town finds his idea interesting enough to audition. But will that be enough for the koala to fulfill his dream? Alright, that concludes our list of best Hollywood Music movies in 2017! 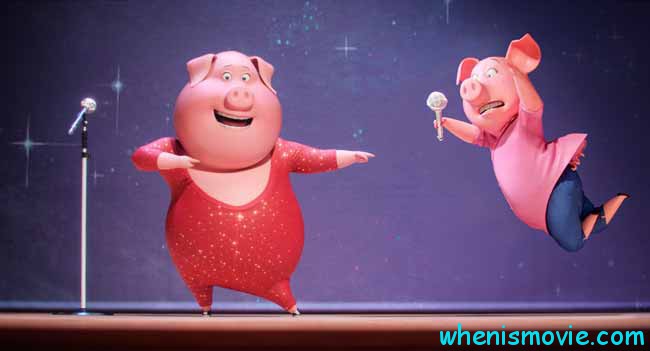