Did you know that Khmer is the official language of the people of Cambodia? Well, it’s true, and overall, 15+ million people speak it. And in this post, we’ll talk about the TOP 10 best Khmer Dubbed movies for all time.

The film industry over there has more than enough features, trademarks, and originality to get us, the Western folks, excited. It’s always thrilling to learn about other cultures, and what better way to do that than through their art – films, in this particular case? 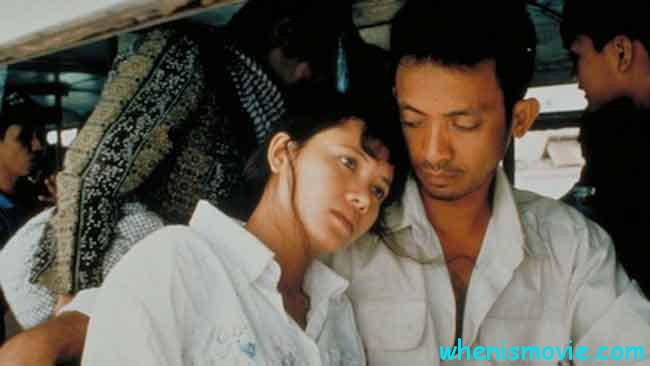 Welcome to 1975: the capital of Cambodia is consumed by chaos. The American soldiers are trying to keep the peace, but the local guerilla squads are getting stronger and bigger in numbers. On the backdrop of the catastrophe, a gorgeous singer with a magical voice enters a game of smarts, deception, and tricks with 2 paramours.

She’s hoping to find a way out of the devastated city. There’s no stopping the insanity that’s going on around them. The only solution is to leave everything behind and start a new life somewhere else. But it’s going to be almost impossible to navigate through the terrors on the streets and make it out without breaking a sweat.

Lida, the main character of this story, is in the real estate business. She’s working with the country’s middle class and makes an honest living. Unfortunately, her relationship with the man she once loved is broken. So, the young woman decides to leave the big, noisy city behind and find peace and quiet on the beach.

However, pretty soon she’ll realize that one can’t escape his/her own path and facing the ghosts is the only way to move forward. The only question is – will Lida be strong enough to handle what’s coming for her? Of the TOP 10 best Khmer Dubbed movies for families, this one’s a solid pick. You can watch it with your partner while cozied up on the couch.

If you’ve been looking for a fast-paced, adrenaline-charged film with a Cambodian flavor, make sure to check Jailbreak out. It was supposed to be a routine convict escort drill for the local law enforcement operatives. But when the inmates take the prison into their own hands, all hell breaks loose. A bunch of special agents, the best of the best, find themselves trapped with no help or means of escape. They’ll have to protect the witness with their own lives. IS there a chance for them to beat their way out of the building, or is it time for the special task force members to face the obvious – they’ll all die in this prison unless a miracle happens?

Sophoun is a young woman without a single care in the world. Her father is a renowned military man, but she lacks his discipline and dedication. All the girl wants to do is have fun and live like today is her last day. So, when the old man comes to her with a new marriage proposal, she runs away with her buddies.

She finds shelter in a shabby old movie theater and comes across a never-seen-before film there – a 1970 cut. Thrilled by the discovery, Sophoun watches it and learns that her mom who’s fighting a lethal disease now starred in this movie as a dashing young starlet. Put The Last Reel on the list of best Khmer Dubbed movies to watch if you appreciate thought-provoking and moving dramas.

The story follows Bora, a striving young man who’s always dreamed of leaving his village in the middle of nowhere and turning into one of the best construction workers. Pretty soon he reunites with his missing bruv. It’s not easy for teenage boys to work in construction, and the income is low, but the money means they can hang out with the girls. They spend their days building luxurious hotels and apartments that they’ll never be able to live in. Still, these young fellas are full of hopes and dreams. All the kids really want is to find a home to live in, friends to rely on and women to fall in love with.

Sean and his friend are ready to put their own lives at risk just to make the whole world see what’s going on in Cambodia. The Khmer Rouge movement is taking over the country, and these two photographers are the only ones who are not afraid to show what this regime is capable of. At first, they just wanted to become famous journalists, but somewhere along the way, they turned into freedom fighters.

Unfortunately, the two got lost in the darkness; yet, their story lives on to this day. What was the Communist Party all about in Cambodia, and did they really do all those terrible things? Stories like this one will help the world know the truth. Of the TOP 10 best Khmer Dubbed movies to watch, this one is a keeper for the fans of insightful dramas.

Looking for a historical drama about the civil war in Cambodia? This is one of the best films about those horrifying events. The people simply wanted to leave bloodshed behind. Savannah is just like that. He used to be a gifted kickboxer before it all started. The war took most of his relatives and loved ones, and now he’s spending his days and nights in his uncle’s home. There, he meets and falls in love with an adorable 19-year-old young woman. She owes a huge amount of money to the local bar’s owner. Her new man dreams of freeing her from the debt and joins forces with an ex-military man to do something he’ll regret for the rest of his life.

Did you know that Cambodia hides a life-defining secret about planet Earth and beyond? Danny, the hero of Broken Balance, is a striving young fella who’s forced to live in poverty. He’s the chosen one and becomes the first man to learn the real truth about his own family and the roots of the Khmer population.

There’s a fragile peace between the world of the humans and the world of the ghosts, and he’s destined to fix the broken balance. There’s a war coming, a battle that will change everything. Danny will have to put his trust in the old friends and the new allies in order to be victorious in this epic clash. Broken Balance is one of the TOP 10 best modern Khmer Dubbed films.

Sereysothea is a legendary rock’n’roll child, one of the greatest Cambodian singers to ever walk the Earth. Unfortunately, when the Communists become the leaders of the country, her life turns into a nightmare. The woman used to be a Goddess, but now her magical voice is pretty much the only thing that keeps her going. The Golden Voice shows how a group of ruthless politicians can affect even the greatest musicians, singers, and artists. Sophea Pel did a wonderful job portraying the iconic lady. As far as the greatest short dramas about famous folks go, this one is right there among the best picks.

Alright, we’re down to the last one! In all fairness, this film is the leader of today’s “race” and a life-defining release for Cambodia. So, when somebody asks you – what is the best Khmer Dubbed movies – you better tell them about The Rice People! The kids in the refugee camps were used to getting their rice from the UN convoys.

But it was time for them to go out there, explore their home and cultivate rice on their own. This is a story about freedom, learning to take matters into one’s hands and standing strong on both feet for what you believe in. This isn’t a mind-blowing blockbuster, but rather an insightful and educational movie about the simple things.