The “jarheads”, as they like to call themselves sometimes, are one of the finest soldiers on this planet. That is why in this article we’ll check out the TOP 10 best Marine movies for all time. Yes, Hollywood is known for making patriotic films to boost the country’s morale.

These fine men and women go through extensive training and are ready 24/7 to take the battle to the enemy and/or to save the innocent civilians in literally every corner of the Earth. Alright, let’s put everything aside and take a look at the greatest releases so far. 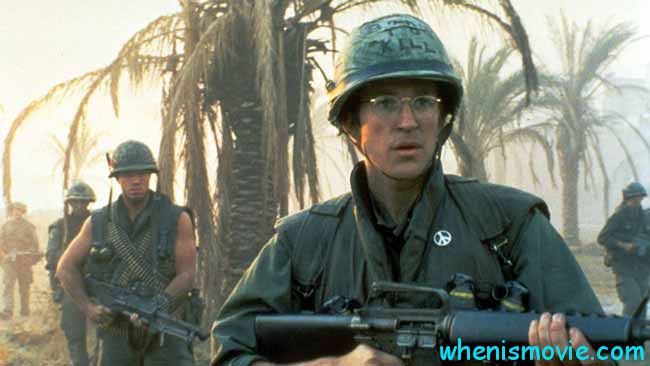 The American ships and subs are doing routine runs, thinking that the seas belong to them. However, soon, when a superior alien race invades the planet, they understand that this is, indeed, the greatest enemy they ever had to deal with. It’s up to the battleships and the Marines onboard to take the heat to the attackers and defend their home by any means necessary.

The aliens come with better tech and are capable of wiping out the entire civilization. But these fine men and women – the crew and the Marines – are used to handling situations like this one.And, together with their Japanese allies, they will do whatever’s necessary to send the ETs back to where they came from.

Ben, his three siblings, and his mom follow the man of the house, a decorated Marine. He’s a pilot and is constantly switching his post. Everything is peaceful and quiet, but the war in Vietnam is about to start. The man is highly demanding and aggressive. He’s used to the military laws and customs and is quick to use them when talking to his family members. The Marine can’t seem to find rest and joy in his life anymore and gladly agrees to use his barbaric tactics to bring a crew of martinets into shape. It’s up to Ben to prove that he’s got what it takes to make the old man proud. Of the TOP 10 best Marine movies for families, this is must-see.

Mr. Childers is a Marine vet: he’s been through Vietnam, Desert Storm and other major wars lead by the US. He’s been a soldier for 30 long years, and fighting is the only thing he’s good at. However, instead of thanking him for the service and honoring him, America is accusing the Marine of doing the unthinkable – killing the innocents.

He was just trying to protect his men, but for the government, he’s like the perfect scapegoat in their political games. His attorney is a man Childers knows from back in the day – Hodges, a fellow Marine. He might not be the most gifted lawyer in the Universe, but the defendant trusts him 100%. Could it be that the veteran is, indeed, guilty of murdering innocent citizens?

At a US Marine Base, a regular soldier is ambushed by two colleagues and beaten to death.  The military men bring the attackers into the court room where the judges will, most likely, charge them with murder and condemn them to death. Mr. Kaffee, an inexperienced lawyer, is assigned by the state to defend these men. The biggest question, of course, is – did they actually kill the poor private, or is it all just a part of a setup, a huge conspiracy that started in the government elite? The Marines claim they were just carrying out orders. So, who gave them, and why? Put A Few Good Men on the list of best Marine movies to watch if you appreciate military dramas and suspenseful lawyer films.

Another fine movie with Tom Cruise as the lead male. This isn’t a work of fiction but a biographical piece about Mr. Kovic, a soldier who was paralyzed during the meaningless war in Vietnam. After he returned home, the man turned into a prominent political activist who dedicated his life to pro-human rights and to making sure the US never started another war ever again.

He knew first-hand the horrors that would inevitably follow and did everything he could to show the regular American men and women that the country he fought for betrayed him and left him all alone in the harsh new world. This is an insightful and educational story that we all need to take a look at.

Anthony, the main character of this film, was just a kid when he decided to join the Marines back in the 80s. When the Gulf War begins, they send his unit into the heart of Middle East. And, after 175 days, Operation Desert Storm begins. Before that, Tony and his comrades had to deal with the heat, the rush of action, play football in the sand, put ridiculous masks on, clean toilets, go crazy and worry about their loved ones back at home.

The operation ends in 5 short days, but the rookie is devastated by the burned bodies, the torn body parts, the demolished villages and his own incompetence. Why did he enlist? And what were the American soldiers doing in Iraq in the first place? Definitely, one of the TOP 10 best modern Marine films.

Welcome to 1945: WW2 is almost over, but the Japs are not backing down. They are ready to die for their Emperor, and it’s up to the US army to crush them in Iwo Jima. The American Marines are up against 12K Japanese soldiers in one of the most brutal and barbaric battles in history. Eventually, the allied forces manage to take the mount and raise the US flag. This picture turns into an iconic symbol of the country’s spirit.

The government brings these men back home to boost the morale of the citizens and to make them proud. After the Great Depression, folks are barely getting by and need the inspiration to keep going. On the other hand, the surviving men don’t really consider themselves to be heroes and deal with their own demons while trying to look like role models for their countrymen.

Mr. Highway is a sergeant, a hard-boiled, rough-tough war vet who’s been through Korea and Vietnam. He’s one of the most potent Marines the country has ever seen and returns to America to join the Corps for one last time. The army gives him a “civilian” job – that of training the rookies, a recon unit. Upon arrival, he discovers that the men in the unit are just a bunch of hippies, not soldiers that are ready to take the battle to the enemy and survive against all odds. His superiors call him a dinosaur, a man that will be of great value during a real war. Eventually, the invasion of Grenada gives him a great chance to prove his worth and to test his marineswhen all hell breaks loose. Of the TOP 10 best Marine movies to watch, this is a no-brainer.

Mr. Stryker, one of the mightiest sergeants in the history of the United States, is going through a rough patch. Recently, his wife left him and took their kid away, turning the man of the house into an angry commander. He’s got a number of green rookies at his disposal and takes his frustration out on them, turning their lives into a disaster. He used to be a tough-yet-just Marine that the others admired.

However, even the folks that know him from back in the day start to wonder whether he’s lost his touch and is trying to make everybody around him miserable. But when the Pacific War starts, his soldiers realize that he had no choice but to be extremely rough with them; otherwise, the Japanese would’ve eaten them all alive out on the battlefield.

Hands down, this is the greatest Marine film out there. The story follows a bunch of Marine Corps recruits during the Vietnam era and the terrifying effects that war has on men. Some of the rookies are ready to kill and are happy to get into the heart of the battle. At the same time, the others – the main character included – are not actually ready to take another human being’s life. But, at the end of the day, you can’t be a friendly person during a war, because you will end up dead.

Alright, now you know what is the best Marine movies. The Yankies are always happy to shoot heroic movies about their valiant men and prove that they are, indeed, the greatest nation in the world!