Home
TOP
What is the best Action movies in 2017?

Action has always played a vital part in our lives, ever since the dawn of mankind. Therefore, it’s no surprise that we’ve got all kinds of action-packed movies these days that try to excite and entertain us with all kinds or awesome and not-so-much scenes. Our list of TOP 10 best new Action movies 2017 talks about the craziest, most fun, explosive and stylish titles that will be (or already are) available to all of us this year. Let’s get cracking!

The first movie in this series was equally praised by the critics and the fans, and it’s safe to say that Chapter 2 is just as great as the original movie. John is back in his “lair” and wants to be left alone. He had more than enough action when he had to deal with the Russians, so now he simply wishes to relax and to enjoy what’s left of his broken life. But, trouble comes looking for him, and soon Wick becomes a part of yet another lethal international wrangle. What could be better than the ever-young Reeves taking down bad guys in Rome, right?!

Ok, how about some exotic Asian flavor? The Great Wall wasn’t built just for the heck of it: every 60 years or so, a horde of brutal monsters descends upon it in an attempt to overrun the guardians and feast on the innocent citizens behind the wall. A couple of mercenaries from the UK arrive in China hoping to form an alliance with this foreign government, but they end up right in the middle of a new attack. Will they be able to survive the horrors of war and get back to their land? Or will they die as heroes fighting for the right cause? As far as the TOP 10 best recent Action movies go, this one’s a must-see for y’all.

The RE franchise has been around for almost 15 years and The Final Chapter is the grandiose finale that the fans truly deserve. It’s action-packed, fast-paced, adrenaline-pumping and heart-stopping all at once. Alice is tired of fighting the unstoppable enemy and decides it’s time to deliver one last killer blow that will put an end to Umbrella and its followers. She goes back to Raccoon City to stop the madmen from killing the majority of humankind. Grab your favorite popcorn and enjoy the ride.

Major, the main character of this story, is a member of an anti-terrorist division. She’s a cyborg, and she’s the leader of her unit. The threats to society and cyberspace never stop, and she’s forced to constantly be on high alert. There’s a new enemy on the horizon, one that wants to destroy the technology that allows humans to create robots. When Major confronts him, he opens her eyes to the real truth: she’s just a servant, a pawn in a sinister, brutal game. Put Ghost in the Shell on your list of best Action movies 2017 if you’re a fan of cyberpunk and thought-provoking tales.

A group of teens (5 in total) accidentally finds a mysterious cave in Angel Grove while walking around at night and comes across a handful of strange, colorful coins. Soon after that, they realize that they’ve been given supernatural abilities. And, while the teenagers try to make sense of their awesome new powers, a creature named Zordon reaches out to them and claims that they are Power Rangers now. He then shows the brave kids how to put their abilities to good use and protect our planet from outer threats. But what if they’re not fully ready to confront an enemy of unbelievable strength? 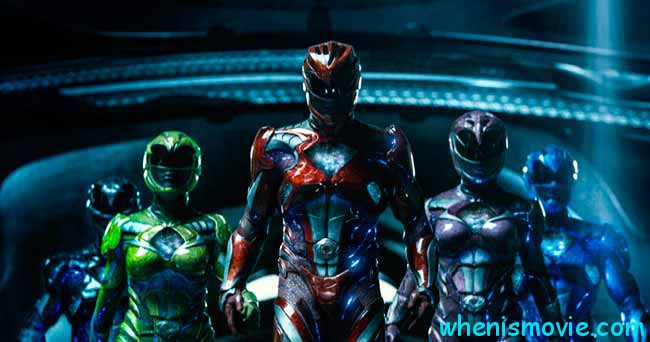 Guardians of the Galaxy Vol 2

With Ronan defeated, the awesome crew of the Guardians travels the Universe, bringing peace and justice while trying to stay positive and not punch each other. Starlord has been doing everything in his power to locate his dad, and the whole team is backing him up in his search. Soon, they meet Ego, a mighty cosmic creature and a new threat in the face of an unknown enemy. This is by far the most dangerous mission they’ve been on, and it’s gonna take all of their wit, agility, and luck to pull this one off. Definitely one of the TOP 10 best Action movies of 2017 to watch!

Diana, a royal princess, has been living on a beautiful island for her entire life, unaware of what was really going on out there in the real world. But, when Trevor, a pilot, survives a crash near the shore, everything changes. Diana saves him, and the man tells her that there’s an all-out war taking the lives of millions. She agrees to help him and do whatever she can to stop the bloodshed. At the same time, she discovers that the Central Powers are developing otherworldly weapons that could destroy every single living creature.

Rey, the main character of the 7th installment in the series, has been through a lot and has grown into a skilled, experienced and fearless young woman. She found Skywalker and persuaded him to join her cause and to fight for the greater good. A terrifying new enemy is rising, and it’s up to Rey and her trusty team to confront the monsters of the Universe and make sure justice is served. Come on, we can’t have a TOP 10 best modern Action films 2017 list without the new Star Wars movie, now can we?

War for the Planet of the Apes

Caesar, the leader of the apes, has been trying to build some sort of truce with the humans. But, after they kill numerous apes in a devastating attack aimed at weakening the enemy and making the humans the kings of the jungle, he realizes that there can never be peace between the two species. So, he prepares a huge army of apes and attacks mankind with everything he’s got. It’s time to put an end to the humans – once and for all. Otherwise, more innocents will die in Caesar’s ranks.

The Kingsmen survive an attack on their headquarters and put all of their resources to finding out who and why decided to hit them. A lethal new villain threatens to take them out, one by one, and that is why the all-grown-up Eggsy and Merlin have no other choice but to join forces with the Yanks and their top-secret organization – Statesman – to save the world. Ok, now you know what is the best Action movies in 2017. Make sure to check back with us more often to get constant updates on everything hot and trendy that’s going on in the industry.