The term anime came from the English word “animation” but it originates from Japan.

Once mankind was on the verge of destruction through the fault of the sinister scientist Dr. Hell. Kouji Kabuto set out to put an end to Dr. Hell’s devilish intentions and restore peace in the world.

This tragic story tells about a girl who lives in a small town of Iwaki, Fukushima Prefecture.

Until recently, the girl was full of beautiful dreams and faith in her own future. Her cherished dream is to become a violinist. However, the dream of the heroine scrapped against a rock because of the Great East Japan earthquake that occurred on March 11, 2011. It was a horrible day for all the Japanese people. There were killed about 15 thousand people, and 2576 are missing, including the girl’s parents. On March 11, 2011, hundreds of buildings were destroyed, thousands of lives were destroyed and millions of human lives were lost.

For the heroine, this catastrophe becomes a huge life experience, which will forever change her cheerful character. She is no longer that frivolous and full of energy girl that she was until quite recently. And now she will have to learn: how to overcome the grief and find the strength to continue to live on and not allow suffering to erase the vivid memories of her past. 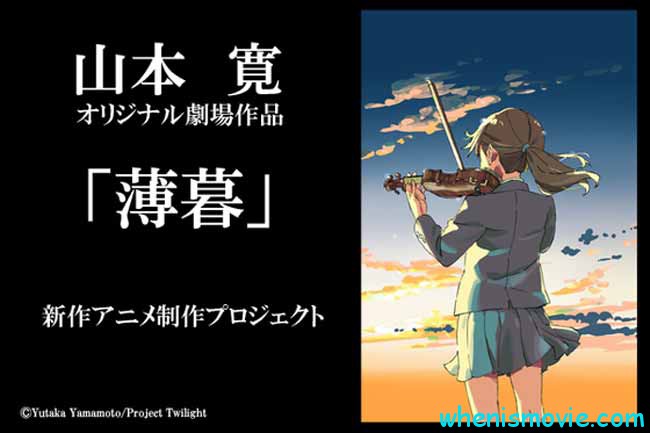 In front of the viewer is an interesing and fascinating story of Yuuta and Rikka during their studying at school. One spring afternoon Tokka claims that she is going to take Rikka back to Italy because her work in a local restaurant has been established and she believes that they should live there together. Tokka also worries that Rikka is not smart enough to enroll in university in Japan. At this time, friends from the club offer Yuuta, who does not want to part with his lover, to escape with her. So, these events marked the beginning of the flight of two lovers all over Japan.

One fine day, a high school student finds someone’s personal diary. Soon it turns out that this diary belongs to Sakura Yamauchi, a classmate of the main character. After reading it, the hero finds out that the girl suffers from a terrible disease – inflammation of the pancreas. To support her in this difficult situation, the young man decides to make friends with Sakura, but the illness takes its toll and the girl dies…

Twelve years have passed since then, already adult hero is arranged to work as a teacher in the same school where Sakura and he studied. Communicating with the students, the young teacher cannot forget the face of a long-gone classmate.

Returning late at night, the hero meets the best friend of Sakura – Kyoko. Learning that an old friend has returned, she starts reminiscing too and begins to see more and more with the hero.

Once the gunsmith Ammon finds the body of a dead woman in the forest, and next to her is an unexpected finding – a newborn baby. Taking pity on the orphan with such a tragic fate, the gunsmith decides to shelter him, later calling Gai. After a while, the boy settles in a house with a gunsmith and soon becomes his apprentice. But at the age of ten, in the process of making a sword, he inadvertently loses his right hand. Then Ammon decides to rewire the ancient demonic sword into prosthesis for Guy, after joining which to his body the boy becomes one with the weapon and receives tremendous power. So, Gai’s adventures begin…

It is the middle of the TOP 10 best recent Anime movies.

Beauty Yuzu Aihara many times represented her first day in a new high school. She was transferred here because of her mother, who married the second time. They had to move to the house of her young man.

Yuzu did not know which school she would go to… She really wanted to find a guy there and lead a normal school life. And everything seems to go quietly in her life until she meets Mei Aihara – the president of the student council and part-time her half-sister.

Professor Orlando for the sake of his beloved wife Molly was ready to do anything. When she began to lose her sight, the professor created an anthropoid robot to help her.

He called this invention “Auto Memory Doll.” Externally, the robot was beautiful: it looked like a young girl which had to fulfill all the wishes of his owners. As a result, many companies began to acquire such robots. These dolls received a wide demand, and the professor willingly sold the rights to create them.

One of the Auto Memory Dolls is called Violet Evergarden. Her story begins here…

Waking up in a strange virtual world without a single memory of his past, Hakuno Kisinami discovers that he was dragged into a battle for survival. The prize for victory in this war is priceless – it is the fulfillment of any wish.

The movie unfolds on the island of Urashima, which is located far from the mainland.

In the past, people living on this island led a very carefree life. Few year ago, 3 main families had a lot of setbacks, which caused a lot of suspicion on them from the residents.

The story begins on the continent ruled by chaos. Chaos creates troubles, disasters and catastrophes, but the rulers of the continent have the opportunity to protect people and stop the chaos with the help of “the power of the Cross.” But one day the rulers start the fight for the “Cross” with each other, wanting to gain strength, refusing their promise to stop the chaos.

We hope it helped find out the answer to the question – what is the best Anime movies in 2018?